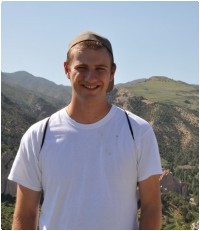 Sam is a campus staff in the city of Waterloo, Ontario. He is excited at this opportunity to join in the work that the Navigators are doing in Waterloo. He has been blessed to have been a part of The Navigators organization as a student in Ottawa, ON since October 2011. This ability to be a part of an organization filled with so many inspiring leaders who so greatly display what it means to have Jesus at the centre of their life is incredible. The Navigators have been a fantastic gateway to better understanding who God is, and growing in a relationship with him. He has been encouraged by several Navigators mentoring him, and is thrilled at the possibility of doing the same in Waterloo.

Sam grew up in a small farm town as the oldest of 4 boys. His brothers are Ben, Isaac and Seth. His dad is a pastor at St. Paul's Presbyterian church in Leaskdale, ON, and his mom is a teacher at a local school. He attended Carleton University in Ottawa, ON, recieving a Bachelor of Science in Psychology with a minor in statistics. He got married in the summer of 2017 to his wife Emily. He is currently studying at Tyndale University in North York working towards a Masters of Divinity with a clinical counselling focus.

Sam loves sports, willing to play whatever is available to him. He is also a big fan of watching sports, with his favourite sports team being the Toronto Maple Leafs. He grew up playing piano, and loves to get active.