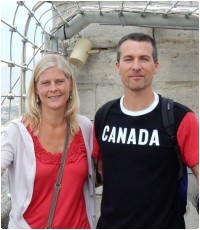 I came to faith on the University of New Brunswick (UNB) campus in 1987.  Before believing in Jesus I was attending Mount Allison University in Sackville New Brunswick.  I met the quarterback for the football team, curiously named Andrew Allison, and was intrigued by his life.  I wasn't sure what he had, but I knew he had something I didn't. During that time I was dating a Christian gal, Michelle, who would eventually become my wife. She had suggested we attend church, which I mentioned to Andrew, who promptly got us going to his church.  We also attended his small group bible studies as well.  I didn't fully understand what Andrew had until I switched out of Mount Allison and went to UNB.  At the time Andrew thought I was lost for good.

Little did Andrew suspect that this lost soul would run into the Navigators.  I ran into a guy by the name of Marc Gallibois who was in my program.  I was living off campus at the time and he was living in residence.  We were hanging out in his room before our next class when I noticed a bible on his desk.  I asked him if he attended Bible Studies.  He answered in the affirmative and told me when the next one was.

At that Bible study led by the Sweede, Ragnar Oborn, the lights went on.  I don't remember what we studied or what we prayed, but I do remember a peace with God that I had not known.  I had that Lieutenant Dan experience in the movie "Forrest Gump", and the mystery of what Andrew Allison had was resolved.  Jesus gave me his peace that surpasses all understanding, and I realized that Jesus could not only calm earthly storms, but also bring a sense of calm to the storms in my life.  He is always there, even when things get rough.

“University isn’t a waiting period for the rest of my life!” exclaimed Kaitlin one Friday morning. She and I have been meeting regularly to discuss apprenticeship to Jesus through our

More
CRAE: It’s all about disagreeing well
February 5, 2020 by Bruce Narbaitz in Campus

How do we deeply disagree and yet still respect each other?