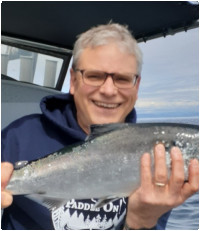 Richie and Sandy both grew up in small towns on Vancouver Island and eventually found themselves studying at UBC in Vancouver. In his first year at UBC, Richie was invited via a survey to consider the person of Jesus Christ and having significant church background was curious enough to join a one on one bible study. Two years later Sandy said no to a similar survey but was invited by a friend to a Navigator campus meeting and at that meeting stepped out in faith to try and understand who Jesus was (or wasn’t). They both began to pursue a relationship with Christ with significant mentoring from a number of Navigator leaders and eventually became student leaders themselves.

After graduation, Richie, with his Bachelor of Commerce degree, headed into a career with CP Rail in Vancouver but continued to help serve the ministry at UBC when available. Sandy began work in Vancouver as a medical secretary and was also serving into the student ministry. They were married in 1985 and by 1986 sensed God’s call and confirmation to work with the Navigators full-time at UBC, taking over the campus leadership in 1990. Sandy became a full-time mom starting with their first son (Brad) being born in 1988, followed by the birth of 2 more sons in 1990 (Ryan) and 1992 (Jason), and their daughter (Emily) in 1995.

Richie hit the 35 year mark of serving in campus ministry in 2021, all at UBC, and spent many years as part of the National Campus Leadership team. He is currently serving on the Navigator National Leadership team alongside his campus directorship.  From 2006 to 2012 Richie also served as team leader for the BC Region for Navigators. Sandy spent many years home schooling their kids. Sandy currently works full-time as a nanny and has a tremendous hospitality ministry, all while keeping the rest of the family sane and organized.