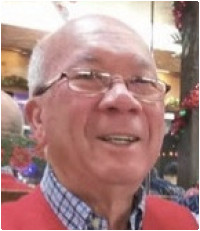 Nuke and Vie Shim were born and grew up in Jamaica, becoming Christians in their late teens. Nuke was established and equipped as a disciple-maker in the early 1960s by fellow Jamaican Ray Hoo, a Navigator trained graduate of Iowa State University.

Nuke majored in studying banking and has worked in banking, sales, purchasing and manufacturing and finally in marketing in the corporate world. He left his job as Marketing Manager with the Colgate-Palmolive Company in 1973 to join the Navigators in Canada.

Nuke & Vie are full-time staff missionaries with The Navigators of Canada and are associate staff with COM. Nuke turned over the pastorate of the Lincoln Road Mandarin Congregation in Waterloo, Ontario in 2010 to a new Mandarin-speaking pastor. Due to Vie's illness from late 2017 and her death in April 2018, Nuke has turned over the leadership of the Waterloo Chinese ministry to Ray Marshall.

Nuke and Vie pioneered the Navigator ministry at the Memorial University of Newfoundland, and have ministered on campuses in Toronto, Guelph and Winnipeg. Nuke and Vie worked in campus ministries for 15 years, led the Church Discipleship Ministries (CDM) in Manitoba, and has served as Director of Development and Public Communications nationally. Nuke continues to live in Waterloo, Ontario.

Effective September 1992, Nuke and Vie’s assignment was to pioneer a disciple-making ministry among scholars and professionals from the People’s Republic of China in Canada. Nuke gave three years on a part-time basis from 1992 - 1995 to U.S. based COM as National Campus Director. Their outreach ministry eventually morphed into Lincoln Road Mandarin Congregation which they pastored until they began to transition the leadership to a new pastor, a mainland Chinese who came to faith in Christ through their ministry.

As Chinese from the Waterloo ministry have graduated, many have moved to Toronto, Ottawa, other centres in Canada and the USA as well as China. Nuke's main ministry now is focussed on coming alongside key Chinese followers of Christ to enable their spiritual growth and fruitful personal ministries. He is also finalising a frexible ministry tool box and is available to the Navigator leadership for special projects.