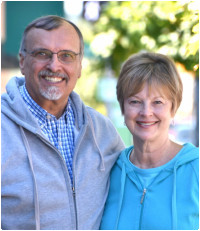 Both my wife Sara and I came to Christ as freshmen through the U.S. College ministry of The Navigators in 1968 and 1971 at the University of Nebraska.  I transferred schools my senior year to the University of Massachusetts to help The Navigators launch a new work in New England.  After graduation, I worked as an electrical engineer and studied for my MBA in Operations before joining staff with The Navigators in 1977 (2017 is our 40th year on staff).  During our first five years on staff, we worked with our college ministries in Boston and New England.  After that, I began to serve as an assistant to various regional directors around the U.S.  I was the Michigan Field Director for our state-wide ministries from 1990 to 1993, and served on our Detroit NavCity leadership team from 1997 to 2017.

Halifax city coach starting June 2017.  Lives in Detroit, MI ... Nav Rep for our U.S. Detroit NavCity ministries, focused on developing our post-college-age ministries (Nav20s) and on being a mentor/alongsider/coach for new staff and laborers.